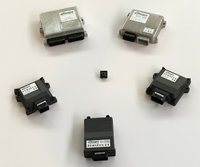 The new ECU PERSEUS has been developed as an evolution of the ECU ELIOS, improving its functions and calibration mapping, in addition to more sophisticated operation strategies.
The gas injection timing is calculated by the gas ECU and is derived from the corresponding petrol injection times generated by the original ECU of the car. Thus, the gas ECU, imitating the petrol ECU, realizes the master / slave operation of the LPG system.
The control unit Perseus is available in several versions:
PERSEUS 24: This is the basic version, very simple to install, which nevertheless allows an extremely accurate tuning of the engine carburetion and is indicated for the majority of the cars. It manages engines up to 4 cylinders.
PERSEUS 48: Is the most advanced version that, in addition to the characteristics of the version 24, allows the following functions:
It can be connected to the vehicle’s OBD system for a more accurate tuning of the carburetion, even using the adaptivity function that adjusts the engine feeding parameters according to its aging. Possibility to clear the recorded errors.
Connection to the signal of the oxygen sensor.
New automatic calibration procedure characterized by new and accurate algorithm.
New procedure for adaptivity as a function of engine load.
New Map Injection Time / Number of motor revolutions (TJ / RPM).
Possibility of connection to a gas temperature sensor (optional) in addition to the water temperature sensor installed on the pressure reducer.
SI-100: is a version derived from the PERSEUS 48 of which has the same functions, but has greater dimensions as it is designed to handle motors from 6 to 8 cylinders.
AJ-500: This is the most advanced version of the series as it has been developed to manage the modern gasoline direct injection. It manages engines up to 4 cylinders.
Display per page
Sort by
Browse Product Pages
* Prices incl. VAT, plus delivery
Stargas E-shop - Innovative Technologies for a greener world